Why drink Ayahuasca? What to expect from it.

Why drink Ayahuasca? What to expect from it.

Posted by christinesuzuki on Nov 23, 2015 in Plants, Tea | No Comments

Why is ‘alternative’ healing becoming such a big thing in the West?  What’s happened with conventional pharmaceuticals?  Why do we seek something to take the pain away over and over again (not just pharmaceuticals, drink, drugs, sex, addictions)..?  Why do we get so caught up and cranky in the first place?..

Because we need help, because the drugs and the pharmaceutical companies don’t work, or, they make things worse..  Because denying we have a problem doesn’t work, because sometimes we feel the symptoms but we don’t know where to start in order to get a cure..  We are ultimately human, programmed to be forgetful and have minds which often dominate our lives; thus, sometimes we forget to ask for this help, even when our bodies and energies have been crying out for years..

Ayahuasca is a traditional, indigenous medicine which has been used for many many years to shed the veils of ‘crap’ (technical word) we accumulate during life.  Consider an innocent, pure, loving baby.  Then consider it’s parents (usually with good intentions), they start to train it how they were trained,to give it the same or similar constraints they were given growing up; i.e. you can’t eat this because of X, do this because of Y, if you do Z you will fail in life, you need to do W to be successful.. etc. etc..  There is also school, religion, peers and other influences which bombard this little soul until it grows up with a whole set of conditions for life that it’s taken from its family, friends and society; without really getting a chance to even express its reason for living.

Ayahuasca (Aya) helps you to see and pull back all of these layers of conditioning, to liberate the soul and give each individual a chance to reset and deprogram from the junk accumulated during life.  Those fears, those anxieties, those pains you have but don’t know where they came from half the time.  Aya helps you to see them for what they are and, purge them out, leaving you a little lighter than society left you (intentionally or unintentionally, everyone tries their best..).

The Maloka roof top when in ceremony during full moon

I went to the jungle to drink this ancient brew because I was struggling in life.  Struggling in my city life to feel a part of something, as so many people who pass me by also felt (to me) so disconnected from life its self.  I wanted to feel a connection to something consistent and healthy, something energising rather than draining.  Yes, I have beautiful friends near by which I am totally grateful for, some family too.  But, this busy city life plus feeling totally done-in from the years of self-abuse, drugs, men, hectic living and, even though my path was now much more conscious, it still hadn’t made up for these past 15 years where I had endured a LOT of pain, suffering and outputting energy never recouped.

You can see it in someone’s eyes when they’ve been on a path like this for too long, not taken enough heed of nature or not getting out enough from the concrete jungle, even for the humble yet beautiful British countryside..  You don’t have to have an interesting story of debauchery to have a reason to want to find this release, quite often the mundane day in day out in the city or ‘civilised’ towns, is what can disconnect you further from the precise reason why you were born..  We weren’t made to be so herded together, our true nature has been inhibited by our drive for growth and excess; but that is another story, I won’t digress.. 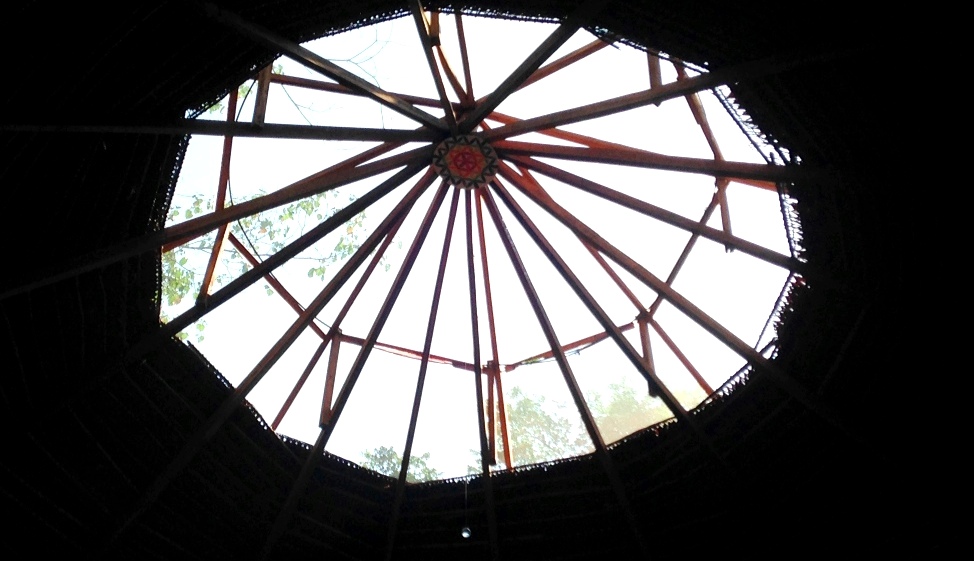 The Maloka roof top during a day ceremony

Again, ayahuasca is not a drug on which to just get high.  Anyone who uses it as such hasn’t been shown how powerful it can be..  Misuse of anything, even paracetamol, alcohol or coffee (all legal and easy to get) can end up fatal, for those people who are scared – don’t be a dickhead and make sure your shaman is legit (am writing a post for this now – PLEASE go from a recommendation, and NOT just a facebook page as I’ve close friends who’ve had a bad encounter with these Facebook promoted people, even if they have thousands of followers, not cool) and you’ll be safe.

I’m sure you get the why of it, deprogram, cast a light on those dark parts of you so hidden you can only feel their shadow.  If you seem to have anxiety, stress, low energy or keep falling into destructive or unhelpful patterns..

So, what to expect from an ayahuasca ceremony?

Everyone experiences it differently, every shaman has a different twist on how their medicine is brewed, how strong it is, or even if you take Aya and not something different, more tailored to suit your needs.  Some people see geometric patterns or visions (check out Luis Tamani’s work, there are many more artists who depict well but his is something else!), some people see unicorns and snakes!  As I’ve written before, you need to set an intention about what you want to work on.  Ask about something you hope to uncover about yourself, or some blocks you wish to clear, then my dear, focus on that intention and let the medicine do it’s work..  Some ceremonies I’ve had deep physical reactions, others just a few visuals and soft messages – But I cannot stress enough how important it is who hosts your ceremony, you need to be in hands of someone who knows what they are doing to help guide your journey with as much love and containment as possible (even if it feels from a far).

It was only in my last 4 ceremonies that I ever purged (down purge, very minimal up purge), the last one was intense but then I asked some big questions, and I am still processing from what I asked for now (I’ve already written about the after process here https://core-focus.co.uk/plant-medicines-ayahuasca/).

That’s all I can write on expectations.  As intentions are more important.  I know a lot of people who are scared to drink Aya, scared perhaps of undoing the tight web of protection they’ve weaved around their life to help feel some kind of safety or order in such a mad world; or scared even to face those darker parts of life/themselves which they don’t wish to revisit..  My opinion to this is: there’s nothing to fear except the fear its self.  Undoing those threads may temporarily be uncomfortable, but we only live this life once..  This is just my opinion.  Everyone is different, thankfully 😉

Much love, I hope this answers a few questions for some xx