Posted by christinesuzuki on Jan 10, 2017 in Meditation, Mental Wellbeing, Yoga | 6 Comments
This has been one of the hardest things I’ve written, yet.  I’ve spoken to students and other teachers about this many times and the generalisation of the issue I pose, generally, centres around individuals and groups whom from the outside, have a lot in common with I.  Thus, when criticising something which looks so close to home, one has to first have looked long and hard in the mirror – actually, criticising anyone is usually a call to take a long hard look at oneself.  But, let’s talk yoga..
However, I’m aware buttons may be pushed for some readers, do comment below, make suggestions for improvement, create a discussion if you disagree or agree.  By no means in this 7 short years I’ve been practicing and studying yoga can I say I have read all the philosophy, solely studied it with intensity or fully embodied it; however, I have had the privilege of having some amazing teachers (taking many forms of actual teachers, students, injuries, etc) and the practice of what has been delivered to me as ‘Yoga’ has literally, saved my life.  The basterdisation of ‘Yoga’ doesn’t feel good to me, it feels the opposite of what I’ve grown with and thus, for current students (including I), future students and many more beings in and around this practice; I feel a need to challenge some of the bullshittery around the Westernised version also known as ‘Yoga’, or Voga or WTF ever..

I was teaching less and less ‘yoga’ last year, still had a couple of consistent classes and clients but generally; I had been put off even telling anyone I teach it, even today my introduction doesn’t include ‘yoga teacher’ due to the connotations around that being in their abundance.  My practices continues to evolve, in a profound way, this too can make it hard to share and sometimes, one needs to take time to fully embody what it is that’s happening as the internal and external world change alongside the practice, thus being mindful to not share a confused message..  Of the yoga classes I teach, it’s taken a long while to move into a place (with some of the regulars) where the space is available to offer more alternative ways to be in Asan (the ‘steady’, comfortable postures), allowing in the potential to drop concepts and conditionings around the general consideration about harder, faster and stronger being the better or only way..
The other reason I’ve found it hard to teach and focused more with Pilates has been this portrayal of the skinny/slim white girl bending over backwards, posing on Instagram, putting legs behind the head and calling it yoga.  Even to view some websites when I’m looking for workshops to attend, WTF – really, why would I want to learn yoga from this person making shapes but somehow feels so far removed from the practice?..  Where’s the self-love and reflection?..
OK, so what makes me any different?  Why criticise this?  I’m different because I don’t give a fuck TBH about how my hair looks in asan, I’m not going to buy into the £100 legging fad, my main care is comfort not contort.  I don’t have an Instagram account and I don’t see the point to post endless selfies trying to prove something.  I did make a demo video a couple of years ago to help a friend with a project and have had requests to make them by other friends and companies, so I’m working on it, but I really don’t understand how you can transpire some of the teachings via non-face to face, energy to energy contact..?  But let’s see, this isn’t a diss on technology!
I’ve heard so much from students, studio managers and other teachers about people getting taught ‘yoga’ by someone doing a headstand in front of the class before they’ve even begun, ‘the young 20 something slim girl coming back from a 200 hour training and taking all the yoga teaching jobs’, students getting Pushed or encouraged to Push themselves into Asan, workshops actively encouraging taking of selfies during the workshop in various poses…  Need I go on..  And all under the umbrella of ‘Yoga’.  THAT is the kind of ‘yoga’ I don’t want to be associated with; I teach intuitive movement perhaps I’ll say instead, or Pilates and mindfulness..  Yes, I too started with a 200 hour course but this was just The Start.  Hats off to anyone who can get onto teaching classes after that brief introduction (unless perhaps already with a vast amount of practice in more than just asan and education in A&P) but it’s not real.  And it’s giving ‘yoga’ a really bad reputation among people who actually give a shit about the connective, expansive and life changing side of this beautiful ancient tradition.  I know I’ve only less than a decade of experience here but I won’t claim to be anything more, I teach modestly and am quite open about my limitations, then if people return they can listen to how I can point only back to them for them to learn what it is they’re looking for.
For a simple example, paschimottonasana, seated forward bend; can you hold your big toes? How does holding your big toes make your WHOLE spine, shoulders, feet, etc feel?  Do you have a feeling of length through out or did you have to compress and contort something to get there?  I.e. is that congruent with your whole?..  Can you still breathe?  Does it even matter that you have your toes?!  Some hips and spines are that open, TBH, I don’t see that many in classes I teach; general bodies have been long deformed by chairs, sofas, cars and society.  Does YOUR body need to be in a deeper bend than him or her?  Do you need to master this posture to post it onto your or as a response to a celebrity teachers’ instawank?  Is that 5 seconds of pain necessary to inflict upon yourself?..  Are you enough aware about how to listen to yourself so you can hear how your body responds to this posture?  So you are aware if that’s the right place for you to be right now?  Or sorry, were you just after a stretch class? 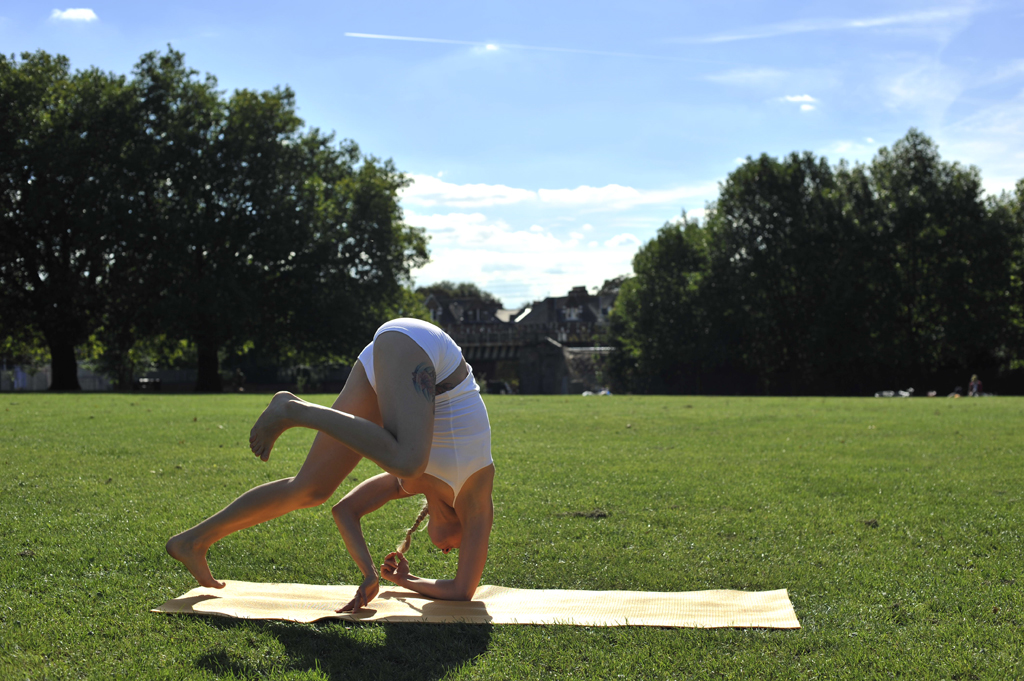 Picture of me on old yoga photoshoot punching above my weight trying to pose for pinchamayurasana – just in case things needed lightening up 😉
It’s the drive to go deeper into posture without regard for causing damage to the body; which for me, has been one of the most powerful realisations (which I keep coming back to!) about how the path of yoga moved from an exercise class (yes, this is how it started for me) into something a lot more.   Saying that, yes, I know by teaching the way that I do, I run the risk of bastardising some of the lineages of Asan; but for me, not taking into consideration that our overly sedentary Western bodies have simply (most of us) had different experiences during the formative years than past yogis, is bastardising the Yamas and Niyamas..  Social media has a lot to answer for about portraying a distorted view on what bodies ‘should’ look like and be capable of doing; smiling contortionists, getting all pretzeled up, just for the shot..  Unless you’re a dancer, gymnast, martial artist, moved properly your whole life (and have some degree of hypermobility) how really can one be able to sit comfortably and breathe in some of these postures?..  Hats off to those who can, love it!  But this doesn’t make up the majority in my UK based circles.
Too often I’ve seen and heard people aggressively being pushed or pushing oneself into postures, throwing our cells around and blaming yoga for our getting injured.  It troubles me to hear from students talking about teachers who are regularly showing off their postures, head standing in front of everyone before class has even begun, FFS, really?!  Whilst of course wearing the latest ‘in’ lycra, all a part of the modern ‘yoga’ brand.  Although I am in one vein, criticising this, in the other I hold space for it, as I’ve been there too.  Feeling the pull to go there still now at times (yes I appreciate aesthetics and pretty things!), it feels good to wear nice things!  But as teachers at least, I encourage you to question your motives sometimes.  It’s hot, I want to wear my abs out..!  Hmmm, yea but then those people who come to my class who aren’t all day movers get a distorted perception of healthy body image..  Those who maybe can’t afford much more than their gym membership get the feeling they don’t have enough money to buy into the ‘yoga’ world of looking good?..  Why and when did yoga become so exclusive?  When did all this get so mixed up?   Again, FFS..  I wear all sorts, but if I want to look sexy I keep it for my free time with the someone I want to look sexy for, not people who are coming to learn something with such a transformational edge with, it gives totally (for my style at least) the wrong impression.  Students are already at one’s mercy due to the set up of teaching, keep it pure, keep it real, keep your freaking EYES wide OPEN.  I’ve recently started teaching yoga classes to banging tunes, requirement of the particular studio, the message still transpires; breath in the asana, not just pushing the painful posture; banging beats, whale noises or silence..

For the past 7 years or so I tried so hard to fit into the yoga world, causing injuries, ignoring my desires for other pursuits and trying to keep up with the trends.  Now I say fuck it.  Fuck the clothing companies (I actually wrote to one about only having size 6 models and was told this is protocol.. Sweaty Betty your response was pretty lame and unsatisfactory), fuck the “I can touch my big toe”, fuck the contortion, fuck the perfect alignment, fuck the competition; give me the sensing, inside out awareness with less headfucks and back aches.  Each of those has it’s space in the world, let’s celebrate the differences for what they are?  Rather than what they claim to be..?